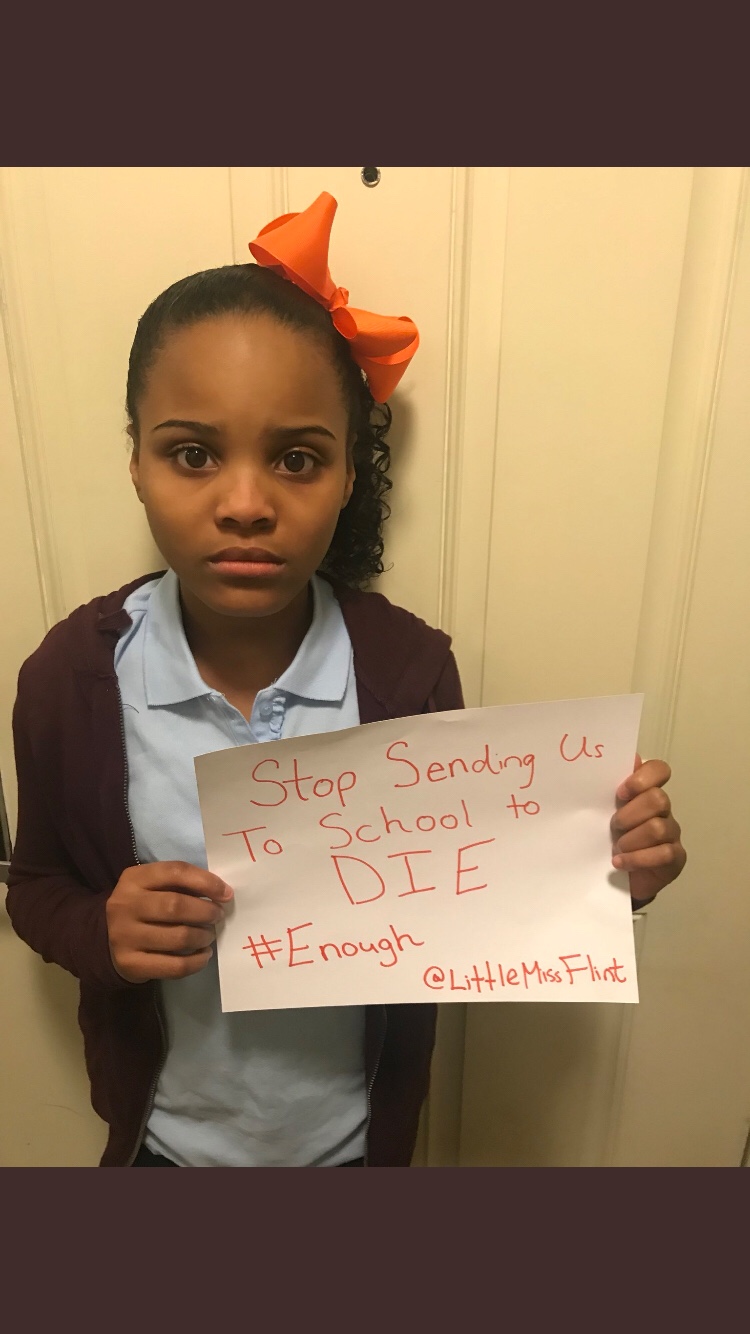 The youth of America have spoken. Their message is loud and clear. And like @LittleMissFlint their impassioned plea and powerful, uncompromising leadership will resonate throughout the annals of history, as far more than just a mere 17-minutes, non-violent demonstration. The wave of meaningful student activism, sparked by the outspoken survivors of the most recent school shooting massacre (at the now infamous, Marjory Stoneman Douglas High School in Parkland, Florida), has only just begun to reveal the leadership potential of this savvy demographic. As the world watched, our children officially forged a firm place in international history on Wednesday, March 14, 2018 also known as #NationalWalkoutDay in concert with what is bound to morph into a formidable youth-led movement to stand the test of time. The simple yet significant takeaway from this historic movement? #Enough.

This entire generation was raised in the literal crossfire of countless episodes of school violence – rendered more disastrous by the widespread proliferation of U.S. assault weapons. Therefore, no other population is more acutely affected, painfully aware and ultimately more qualified to comprise this organic movement and address the prevalent U.S. school gun violence issue than our children. In terms of specific demands, the youth driven, @NationalSchoolWalkout platform realistically advocated for the following 3 Congressional actions:

While students across the country marched to enact Revolutionary and grassroots level reforms to end gun violence and ensure school safety, the U.S. House of Representatives simultaneously passed a bill to fund security measures within our nation’s schools. This bipartisan bill was a definite start in the right direction, however it admittedly fell short of the intended goal due to its conspicuous lack of inclusion of any of the aforementioned platform demands. Of course, as a potential form of adult-inspired and nonsensical distraction, there is also an increasing debate about whether or not to arm teachers (who already suffer from the criminal absence of tangible resources and a respectful increase in meager pay wages to empower the successful education of our students), but alas…I digress. The most significant and newsworthy caveat to this powerful youth movement which bears mentioning for its admirable ‘Bad-Assness’, is that the youth overwhelmingly frown upon any form of traditional, sell-out, NRA-aligned, hence ‘deep political pockets’ financed gun control initiatives; but opt instead to ‘give the finger’ to the status quo, which openly prioritizes guns over their lives.

In a nutshell, our children are courageously paving the way for entire generations of seemingly clueless adults, as well as future generations yet to be born. The youth are righting the wrongs they unintentionally inherited from us-their beloved parents-and in the case of the #NationalSchoolWalkout movement, they are literally fighting for their lives. This radical changing of the guard is the fulfillment of prophecy of all successful movements and is – as it should be – an uncompromising force teeming with independent thought, interracial/intergenerational support and replete with lasting change agent capabilities. Our legendary Civil Rights Movement predecessors would be proud. I am wholly inspired and deeply ecstatic to witness this remarkable show of well organized, civil disobedience. As adults let’s agree to remove the limiting constraints of either Democrat or Republican party agendas and reserve our trademark and otherwise woefully misplaced judgment to simply stand in awe of our children’s collective ascendancy to leadership. Our future is in good, capable (and assault weapons-free), hands.