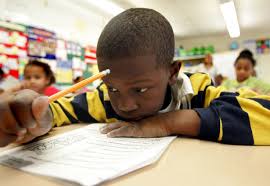 The corporate driven privatization of America’s public schools has completely transformed this nation’s educational system. These changes have disproportionately been implemented among inner-city schools, segregated by race and class, and the implications of this movement have been to the grave disadvantage of America’s most underserved population of students. Schools in large part, represent big business for corporations and as such, public education in the traditional sense, has been nearly entirely eliminated in favor of a voucher/charter model touted as representing choice; but in essence comprising a private, for-profit agenda. This public-private agenda is a nationwide phenomenon being championed by government officials like Betsy DeVos on behalf of corporate interests. In the wake of this movement, teachers’ unions are virtually obsolete and for-profit, charter school principals maintain absolute rule over the schools’ personnel (hiring and firing authority without a system of checks and balances). Perhaps to those outside of the realm of education policy, there is little difference between a public and charter school. In fact “school choice” or “privatization” may sound standard or even trendy in some respects. However, an informed critical #EdcuateToLiberate inspired viewpoint of this country’s public-private agenda reveals it to be much more than a passing fad and nothing short of disastrous for the vast intellectual potential gone to waste. On the contrary, the ever-expanding school privatization movement has essentially shifted our once publicly funded, accountability-driven and compulsory educational system into a tax-funded, privately run, for-profit institutional machine, which only exists to serve the interests of a minority of businesses, policymakers, religious right and/or ostensibly racist, conservative and political figures. In short, America’s schools represent big business and K-12 students are being trained rather than educated in supposed schools of choice. There are no large cities in which these shifts more apparent, than in Chicago and Detroit, respectively.

In Chicago, Mayor Rahm Emmanuel has all but decimated the city’s public schools system – with his very public, aggressive agenda to transform public schools into big business with which to reward wealthy, corporate interests. In this prioritized agenda to ensure the demise of public schools, over the past several years a record number of literally hundreds of public schools have closed on both Chicago’s South and West sides. To be perfectly honest, the high needs, low-income and impoverished neighborhood communities have disproportionately suffered the closure of their formerly public schools, in favor of a bevy of charter (more aptly referred to as private, corporate run schools) by design. The targeted nature of this uniquely discernible urban agenda, presented the initial red flags of impending doom. Namely, pre-selected communities of color in Chicago have been hardest hit including: Bronzeville, North Lawndale, Garfield Park and Englewood. As it regards the previously union protected, health care and benefits ensured careers of this nation’s under-appreciated public schools teachers? Well, needless to say, the job losses have been severe. Charter schools overwhelmingly operate without unions and adding insult to injury, generally disregard ‘best practices’ such as optimal class size standards, thus resulting in the loss of thousands of teachers’ jobs. At present, the mass orchestrated, all-inclusive takeover of public schools in cities like Chicago and Detroit seemingly ensures the end to critical analysis, deep thought, and the competitive edge of the now defunct public schools system. As an accompaniment to the corporate takeover of schools is an ushering in of an entirely acceptable norm of: widespread levels of low academic performance, general apathy, mediocrity and school as a center for New World Order wealth building or training, rather than as an institution of learning. Schools as the nexus of knowledge development used to translate into education as a springboard to lifelong learning and advanced degree attainment. Education in America is now a precursor, predictor and funnel to an industrialized prison system, or a dumbed-down workforce – at least in urban America.

Here in the state of Michigan, the privatization of public schools has largely been the central objective of outgoing MI Governor, Rick Snyder. In fact, even the hushed legacy of countless city of Detroit mayor’s attempting to be intimately involved in education policy, as a means to legislate a financial takeover, has been apparent for nearly 20 years. The decimation of Detroit’s public schools and the accompanying deep-seated corruption is best chronicled through the financial trail of tears left behind. For example, there was never a financial deficit in the Detroit Public Schools system, until after the failing model of a statewide takeover of public schools was initiated by then Republican Governor, John Engler. His plan, later implemented and touted as a school choice movement, was exclusively applied to urban schools by his successors (Jennifer Granholm and Rick Snyder respectively). Government appointed symbols of Emergency mismanagement uniquely targeted Detroit area urban community schools with large enrollments of impoverished students of color, without exception. Public schools were wiped out in areas including: Highland Park, Hamtramck, Flint, Pontiac, Benton Harbor and Muskegon. Each of these cities were prime examples of those intentionally targeted for a legislated public-private agenda, enforcement of school privatization. As outlined, the city of Detroit essentially followed the Chicago example in that a small cadre of corporate forces coalesced to engineer a full-scale destruction of of the state’s largest public schools system. Moreover, since the 1990s Dick and Betsy DeVos have sadly, yet successfully influenced Michigan education policies by using private giving to drive their wealthy, conservative, and anti-public school education agenda. There’s evidence of the longtime DeVos “support of vouchers for private, religious schools; conservative Christian groups like the Foundation for Traditional Values, which have pushed to soften the separation of church and state; and organizations like Michigan’s Mackinac Center for Public Policy, which have championed the privatization of the education system”. Undoubtedly, the concerted efforts to engineer a the full-scale privatization of schools here in Mi, has been so successful that according to NAEP data the state of MI has dropped in ranking from 14th in the nation, to the 43rd place (out of 52), in just the area of fourth grade mathematics. This is a clear and unadulterated reflection of the intentional destruction of public education in favor of a more profitable, privatized model – nationwide.

Ultimately, according to Barkan in the Washington Post, 2018 “Public funding, private management — these four words sum up American-style privatization whether applied to airports, prisons, or elementary and secondary schools”. While the public-private agenda of this movement is often hidden, the players are much more visible. Namely, the election of Trump and the subsequent appointment of under-qualified DeVos, as Education Secretary have cemented a controversial and racism fueled agenda to summarily destroy public schools in America, particularly those serving the needs of Black and Brown children, and their campaign has been successful. This movement has drawn definitive lines in the sand and aggressive privatization efforts are easily identifiable in countless urban communities segregated by race and class. As such, the traditional view of education as the great equalizer or even as a symbol of democracy is no longer accurate. While wealthy, agenda-driven conservatives shift K-12 public funding into privatized charter schools, finances are diverted from the curriculum, staffing and school resource needs of the schools serving the overwhelming majority of low-income students of color under the guise of offering “choice”. All the while, charter schools which claim to be “public”-because they receive tax-payer money, are only overseen by state-approved authorities in theory. Because in actuality, private-sector entities — boards of directors and charter management organizations (CMOs) — manage these schools and control the finances, with little to no transparency, accountability or disclosure of financial records amid claims of “private status”. In terms of performance, charter schools often perform no better (or even far worse), than their public school counterparts. “Given the overall record of charter schools, support in the general public and among minorities has been slipping”(Barkan, 2018). Thus, our children are overwhelmingly trained (I.E. languish in low-performing schools, comprising the achievement gap), rather than educated. Ultimately, the demise of public education results in increasing the profit margins for wealthy, conservatives in the private sector – who pledge to miseducate and then exploitatively employ and/or imprison Americans of color – thus ensuring a profit at both ends of the privatization spectrum.

In a nutshell, our children are no longer universally provided with a sound, globally competitive and/or relevant education. In fact, it is safe to conclude that the public-private movement within America’s education system is certain to result in our students’ continual academic decline, as the achievement gap widens and failing students are exploitatively and uniquely trained to constitute mindless, un-empowered menial workers or even criminals within a New World Order. Along with common publicly funded yet largely privatized institutions such as health care, transportation, and the prison industrialized complex – education has long been deemed ripe for privatization by the corporate sector. The increasing fulfillment of this public-private movement ushers in a significant era, in which education will no longer be regarded as a human right but be reserved for only the privileged few, I.E. those who can afford to pay for it. The reason education has been targeted for privatization is simple? On a global platform, education constitutes a $2 trillion dollar industry. For many of those who have already matriculated through a sound public educational foundation – the nation’s K-12 population is now regarded as expendable. Indeed, the concept of training as opposed to being educated is thoroughly underway and has detrimental implications for society as a whole. Namely, one might well predict a likely conclusion to the public-private agenda, based upon what has already happened specifically within the urban communities of Chicago, Illinois and Detroit, Michigan respectively. After all, as most profoundly uttered by the Honorable Malcolm X Ell Hajj Malik El Shabazz, “Of all our studies, history is best qualified to reward our research”. The solution? Educate to Liberate…