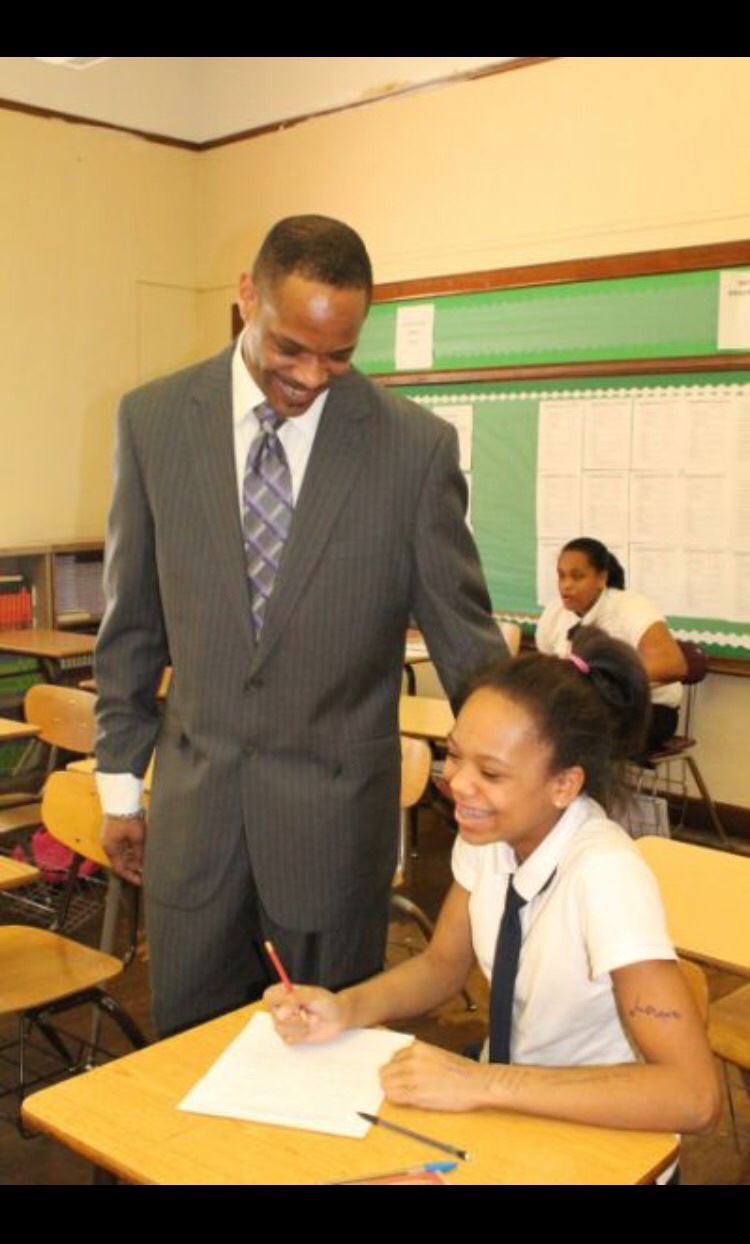 My daughter teases me for being so impassioned about life experiences, current events, and especially about injustice far and wide. I am the literal Queen of taking advantage of life’s teachable moments. I wear this honor proudly, because I realize that the penchant for turning any situation into an opportunity to engage critical thinking, debate or inform a logical opinion is what makes me such a natural born teacher. In my opinion, a teacher can teach about any subject, in any place and at anytime. So when I launch into an impromptu lecture on self-love and African history or the importance of a healthy knowledge of self, whenever someone around me questions my heritage because of my Pan-African name – Jendayi just laughs, shakes her head and typically walks away because she’s heard it all before and would rather skip the repeat lesson (lol). For the record, this example is not just blog content, but this actually happened a few weeks ago when I met someone in Chicago and the young woman inquired why I had an African name since I was apparently, from Detroit and not the continent . . . Baby! Let me tell you, I launched full throttle into a lesson to rival any history course on Africa as the birthplace of all humanity. I was admittedly in my element as a teacher and as for the young woman? Well, she was the recipient (albeit unwillingly), of an unscripted mini lesson on that day.

Likewise, we should all leverage relevant current events as viable opportunities to engage teachable moments. As a pertinent example, I am perfectly capable and willing to employ the rigorous literacy shifts of complexity, grounded/objective evidence and building knowledge through context rich nonfiction by exploring daily news events, as they happen in real time, with unsuspecting “students” of life. So as to avoid the mindless folly of watching television or obsessing about the stresses of daily life – I am apt to turning the overwhelmingly negative occurrences of daily life in America into teachable moments. Educators should ideally welcome an opportunity to cover the basics of Trump’s looming impeachment as a lesson in integrity and to explore timely themes of anti-corruption in government. Another option is to encourage our families, friends and social media contacts to process, respond to and grieve the tragic school shooting in Santa Clarita from the often disregarded perspective of those most acutely affected by this harsh, but all too common reality: teachers and students. And for the sports buffs in our midst, why not motivate a social justice inspired discussion of Kaepernick’s potential return to the NFL by asking them to consider combing the persuasive evidence that his widely touted workout opportunity is curiously subject to an entirely different set of rules – thus rendering it suspect. Lastly, though this lesson is admittedly out of my reach as an old-school Hip-Hop head who has little respect for the music and trash-adjacent artists of today, one could scarcely argue how motivated our children or other young people in our lives might be to do more than mourn the temporary loss of a young man who has fallen prey to the penal system, but rather to gather evidence as a means to compare and contrast Kodak Black’s recent arrest and sentencing (who even is this young man? And wth are his songs?), to that of equally irresponsible yet white, privileged entertainers who are similarly guilty of doing “Stupid things since they were 15” to quote the judge in Black’s case. Certainly, a critical analysis approach to daily news has universal benefits in rendering us all more discerning and research oriented as opposed to accepting stories at face value. Ultimately, each aforementioned topic frames a unique opportunity to leverage a teachable moment and to potentially explore relevant, cross-curricular themes of civics, school safety, human rights and the currency of white privilege v. the presumption of Black guilt in the criminal justice system. Just some thoughts to consider.

In many ways as educators, it is our natural inclination to “school people” or to model the depths of critical thought and expression to the less inspired, mere mortals around us – so we should regularly and in my humble opinion, must increasingly make our indelible marks upon ensuring a better world for ALL, by leveraging our skills as educators in embracing the teachable moments in life. One of the ways we shine our innate light in our profession is to spark the longing to know more and to motivate discussion, deep thought and a quest for knowledge on a wide range of subjects and concepts. Of course, there might be some who say, perhaps rightfully, “Hey I don’t get paid to enlighten people 24-7 so why should I educate for free?” And certainly we have a right to unplug, take a day off or just veg at as the spirit moves. However, let’s not forget the wisdom in the scholarly quote of our revered elder and honored ancestor, Dr. John Henrik Clarke who profoundly stated: “I only debate my equals. All others, I teach.” #MicDrop. I agree with this sentiment wholeheartedly and as in all things in life, I choose my battles wisely and opt to drop knowledge in arenas where I know my gift will be appreciated and valued. Let’s consider for a moment that fine tuning our craft on our own unsuspecting family members, friends and strangers/acquaintances, is a benefit to us as well. Who can argue with the notion that in this age where ignorance is regarded as a virtue and knowledge sharing is officially a 21st Century relic. So, since people are far too dependent on technology, preoccupied with pedestrian presidential musings via Twitter and reliant upon others to do their thinking for them as they monotonously advance through the cycle of life – I say we have a moral obligation to raise our collective level of consciousness.

Here’s a thought: What if the dearth of the universal value of teaching as a career choice and our disrespectful pay overall is as easily attributed to our own unwillingness to perpetually shine our lights upon the world as a manifestation of our deepest fear as it is the fault of society’s inequity? I submit, later for playing down our pivotal role in propagating intelligence as a universal theme and it is high time for us to cash in on our relative goldmine as a value-added resource to all of humanity. Forget all the second job hustles we are forced to engage in as a means to make ends meet, and let’s agree to retire exploitative, pennies on the dollar profits from entities like teachers pay teachers, as beneath our pay grade. Let us embrace the teachable moments of life both for our own enjoyment and for the tangible benefits derived from our growth mindsets expanding the public’s regard for our incalculable worth. By virtue of our own self-fulfilling prophecy of our worth and esteem, let us admonish others that we are more valuable than pro athletes, entertainers, and Fortune 500 executives combined – and remind them that they (like each of the aforementioned stakeholders), would truly have nothing, if it were not for dynamic teachers like us, who give so unselfishly of ourselves in this noble profession. Each of us has the creative and divine power to dispel the universal notion that teaching is an unwanted, dreaded or dishonorable profession by honoring ourselves and using our skill set and powers to change the minds of the world. Many of you, like me, were born to teach. We have a literal, non-transferable gift and for those who have tried this profession and failed, they learned the hard way that pimping ain’t easy . . . but somebody’s got to do it. Indeed, the satisfaction and rewards associated with being an educator will only begin to outweigh the liabilities to the extent that we share willingly of our gifts, while at the same time compel others to sustain the future of our fine profession by rewarding us, accordingly.

Leveraging the teachable moment offers two-fold benefits: the first part is akin to ego tripping and taking stock of our own gifts, because truly ain’t nobody bad like teachers baby. The other part is to inform the wealth of documented evidence that as others have their own level of consciousness raised and begin to consider the sum value of our ability to teach spontaneously on a wide variety of topics, they will be more readily inclined to both recognize and honor the marketability of our unique set of skills. As a collective bonus, the more educators increasingly embrace the virtues of #anti-racism, #equity and #inclusion and their pivotal role in developing the intellect, at all levels – others around us will increasingly realize that though we are admittedly knowledgeable, capable and wise, there is truly so much more for us to learn. I have faith that as educators seize the opportunity to relieve others of their ignorance, racism and apathy; we accept our anointment as those uniquely gifted to be a part of the solution, as opposed to the problem. In many instances, if people knew better . . . they would do better. So, teachable moments are not merely reserved for those ideal occasions in our own classrooms where poignant lessons can hit home, but should be our literal calling cards as educators, social activists and change makers throughout the diaspora. Granted, perhaps this suggestion is not for everyone. Undoubtedly, this message will resonate most with those who regard this profession as a calling rather than a career and for those like me, who have such a passion for the continuous cycle of teaching, learning and repeating – that we do it all day anyway. On a personal note, early on in my teaching career, when I would get home, seemingly ready to decompress and engage in my beloved evening rituals of cooking, listening to music and cleaning or spending time with family; during conversations about any given topic, my husband would sometimes feel the urge to remind me “Girl, I ain’t one of your students.” Instinctively, I would become conscious of my use of some innate educator behavior (I would have otherwise been blind to because its truly second nature) and I would always lovingly, verbally affirm “I know hun. I guess old habits die hard.” Secretly, deep down inside I am almost certain that I would really be smiling and thinking: “But in a way, you are my student dear husband . . . don’t fight it (smile), just learn”.