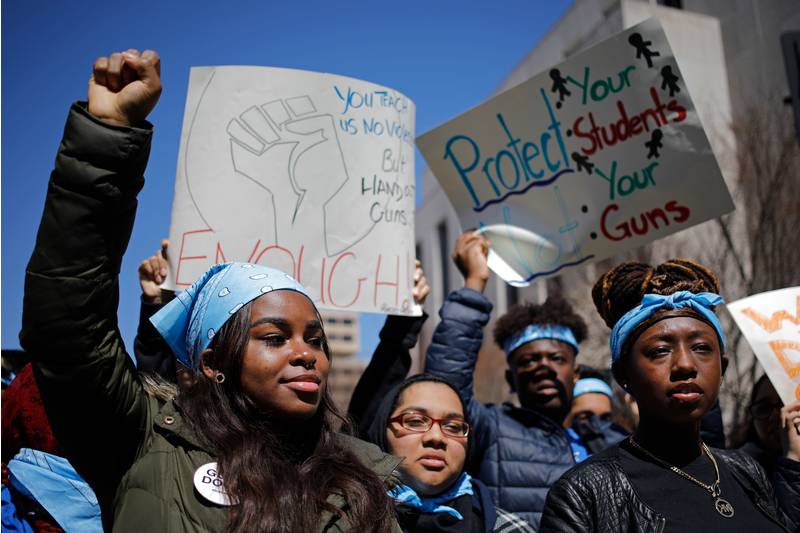 The Educate to Liberate collective (comprised of conscious scholars, educators, activists and others aligned with an academic, liberation ideology), wholly salute the #MarchForOurLives movement for its inclusivity. We acknowledge this initiative as a powerful platform to prioritize both the uncompromising survivor spirit of Parkland students who were very recently victimized by gun violence; and to highlight the pivotal, unfiltered voices of Black youth, whose very existence has always been unjustly traumatized by violence. Given that violence is a tangible accompaniment and by-product of America’s embedded system of institutionalized racism, Black youth are passionate and informed advocates. Though all-too-often marginalized, the courageous voice and historic revolutionary activism of Black youth can now begin to duly earn a righteous position of esteem in the youth leadership canon. The recognition that Black lives, do indeed matter, is long overdue. And in order to truly be meaningful it is incumbent upon this and all other viable movements, to increasingly sustain deep inclusiveness to engender respect and/or to impact history as an authentic, revolutionary force of change.

It is an inarguable fact that Black youth have long laid an exemplary foundation with which to usher in this modern, clarion call for anti-violence activism and systemic change. The uncompromising, valued and painfully self-aware narratives of Black youth have repeatedly been sounded: in Oakland-on behalf of Oscar Grant; in Chicago-on behalf of Hadiya Pendleton; in Ferguson-on behalf of Mike Brown; in Baltimore-on behalf of Freddie Grey; and perhaps most tragically, in New York-as evidenced by Erica Garner’s unscripted, martyrdom-aligned supreme sacrifice on behalf of her unlawfully murdered father, Eric Garner. In fact, because the articulate and impassioned voices of Black youth have so long been ignored by mainstream media-it is glaringly apparent that the #MarchForOurLives youth movement stands on mighty shoulders.

Judging by the passion and eloquence of the conscious youth of all ethnicities able to utilize this national platform to our collective advantage, the selective omission of past injustice upon oppressed masses (in particular that of Black people), has clearly not been lost on this informed, social media armed and politically savvy generation. As a matter of documented record, today’s youth are literally screaming: “Representation Matters” in the most poignant ways conceivable, as they speak truth to power on behalf of the issues of gun reform, marginalization of the needs of American youth and misplaced political allegiances. Undoubtedly, the notion of inclusion is itself a Revolutionary act.

Based on the widespread success of the #MarchForOurLives initiatives around the country the empowered, collective message of our youth is clear: enough is indeed enough and it seems NRA funded politicians are being put on notice, at the same time the media is being duly forewarned that the whitewashing of the anti-violence movement, is unacceptable. It is both transparent and disingenuous for the mass media to continually capitalize upon the abject suffering of the Black masses in a vacuum as merely “a Black problem”. Violence in the Black community has been intentionally used as a means to further perpetuate the myth of White supremacy, exacerbate the oppression of impoverished schools, neighborhoods and/or to increasingly promote injustice, racism and the systemic extinction of Black people. Clearly gun violence (and the extremist right-wing, hate propaganda determined to have repeatedly fueled the countless young, White, terrorist shooters), has now officially backfired on America. As such, violence can no longer be falsely characterized as a norm of the Black experience, but is an unprecedented enigma which encompasses the entire American experience…

The #MarchForOurLives movement leaders are duly noted for their conscious, moral barometer and strategic, inclusive attempts to engage a few key voices of Black youth in this initiative. It is becoming more apparent that the experienced voices of Black people are no longer considered incidental to the youth leadership narrative, but rather worthy of a vital national platform of significance, which should have been here all the time. No longer will the Black experience be overwhelmingly ignored and omitted from the public platform of the national anti-violence stage. Our dues have been paid and our investment is in blood, sweat, tears and the incalculable loss of Black lives.