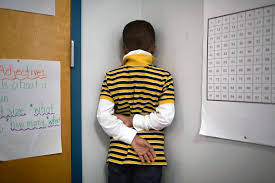 The Detroit Free Press recently highlighted a Detroit Public Schools Community District (DPSCD) initiative to address the thousands of suspensions (16,000 to be exact), on record in the past year. Their proposed solution promises to exacerbate the problem of school suspensions by imposing a reactionary ‘holding cell’ of sorts, rather than pro-actively exploring positive behavioral interventions. The key initiative is as reprehensible and embarrassing as are the exorbitant suspension numbers, because this brilliant plan (Not!), calls for “Out-of-school suspension centers so that suspended students who must be removed from school are able to keep up with their schoolwork with the help of certified teachers” (Higgins, 2018). Seriously?! C’mon Detroit, you can and must do better than this. It would appear that countless public schools, nationwide, are unable to even mask their collusion with the prison industrial complex and exist not to educate but to continually funnel their Black and Brown students into the school-to-prison pipeline. This is a systemic problem whereby school suspensions/expulsions, referrals to law enforcement and/or alternative schools, and even school-based arrests have skyrocketed, thus blurring the lines between education and the criminal justice system. American students are over-policed and mis-educated, thus encompassing the school-to-prison pipeline.

The school-to-prison pipeline and its related implications must be examined as a very tangible consequence of the mis-education of Black students. Spending time out of the classroom for perceived behavioral deficiencies invariably leads to Black students falling further behind their peers, thus widening what is referred to as the achievement gap. A scholarly consensus on the salient link between mis-education and the school-to-prison pipeline appears to be best summarized in the statement that “schools and prisons do not sit on opposite sides of a metaphorical path, and the criminal justice system is not merely at the end of the pipeline–it is implicated all along the way” (Simmons, 2017). Further, the school-to-prison pipeline is an outgrowth of the premise of mis-education because research has indicated that systemic racial profiling or the criminalization of Black students begins in schools and is inextricably linked to their diminished academic performance (Malone & Malone, 2015; Simmons, 2017). In terms of how this epidemic is inherently racist, education statistics have long proven that Black students are far more likely to be disciplined than any other racial or ethnic group and to also receive longer suspensions. In fact, Black students begin the cycle of school suspensions as early as pre-kindergarten, throughout elementary and middle school and continuing through high school (provided they have not yet dropped out/been incarcerated). Ervin and O’Hagan (2013) quoted one school superintendent as saying, “We have a serious problem here. The data is clear that there is a disproportionate number of students of color being suspended and expelled”.

#EducationNotIncarceration. The asinine decision of the DPSCD to support out-of-school suspension centers rather than to appropriately counter the exorbitant suspension rate aligns with the data which proves that of the seven districts in the United States with the highest suspension rates – the sole commonality is that all had majority Black enrollment. According to the U.S. Department of Education Office for Civil Rights, Black students are 3.5 times more likely to be suspended or expelled. Although they are only 18% of the overall student population, Black students comprise 46% of those students suspended from school more than one time. The harsh reality is that “one in every three Black males born today can expect to go to prison at some point in their life, compared with one in every six Latino males, and one in every 17 White males, if current incarceration trends continue” (Knafo, 2013). Students with disabilities are twice as likely to be suspended than their non-disabled peers, and LGBT students are 1.4 times more likely to face suspension than their straight peers. In Ohio, a Black child with an emotional disability was 17 times more likely to be suspended than a White, non-disabled peer. A thorough consideration of each of these “risk factors,” exposes the prevalence of racist underpinnings of the school-to-prison pipeline. According to Winters and Bethune (2014), these examples outlining the degree of inherently racist school behavior policies and school suspension practices inscribe moral intention on the presence of Black children in U.S. schools, potentially robbing them of their youth, their future, and potentially, their lives.

Considering the reality that school disciplinary practices fuel the prison industrial complex, Detroit’s proposed out-of-school suspension centers are reprehensible and inexcusable. If given form, these centers will operate as a form of sanctioned, education funded, pre-prison factories. This initiative is especially unacceptable coming from Detroit as this school system is widely known for its Republican governor appointed style of mismanagement, dilapidated buildings, massive debt, and low academic achievement rates. Namely, DPSCD Superintendent Nikolai Vitti garnered high profile attention for his recent statement that Detroit children have been used as political “pawns” and that both racism and dysfunction have marked the primarily Black system’s operations for more than a decade. Vitti went on to proclaim that this “would never, ever happen in any White suburban district in this country”, and I daresay neither would these systems allow the presence of the school-to-prison pipeline.

It is no longer surprising, but admittedly heartbreaking, to bear witness to abysmal standardized testing scores and stagnant academic achievement rates in large school systems like Detroit, which find new and inventive ways to normalize high rates of school suspensions. American schools are failing our students in unprecedented fashion . . . and one of the most significant ways that mis-education takes form, is through the school-to-prison pipeline. A dearth of statistics prove that suspensions and expulsions are doing much more harm than good, in both education systems and in society as a whole. There are isolated cases of schools who have successfully conquered the disciplinary risk factors aligned with the school-to-prison pipeline. These schools are getting better results by rejecting zero tolerance policies, instituting intervention programs like PBIS, expanding upon counseling services and by exercising a wide range of outside of school agency referrals. The solutions are certainly not simple, and may even prove to be costly, but I suspect that the beneficial returns on a sound education are far more preferable to the disastrous impact of America’s alarming rate of mass incarceration. #EducateToLiberate