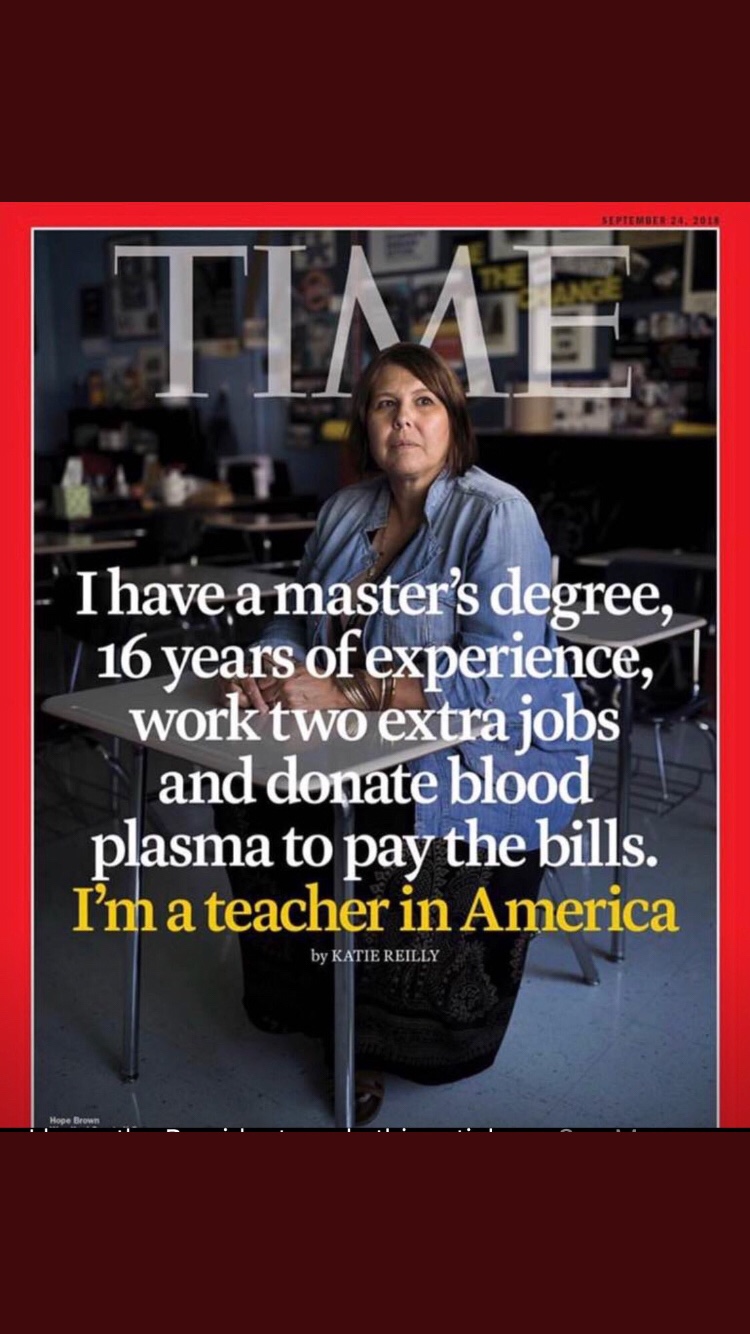 Teaching is such a thankless vocation. As a lifelong educator, I, like many, can attest that the rewards from this honored profession are intrinsic. However as educators, our heroic efforts, our very livelihoods, are increasingly undervalued. Based upon the recent Time exposé highlighting the skewed priorities of the nation, one could argue that educator discontent has reached epidemic levels of crisis. Well, the widespread attention and consensus of many of a state of emergency is long overdue and fills the void of a welcomed acknowledgment on behalf of the ranks of America’s most disrespected and maligned professional ranks: its teachers.

From paying for our classroom supplies out of pocket, to being overwhelmed on a daily basis by overcrowded classrooms, pressure to “teach to the test” and the sole recipient of none of the gratitude, but all of the blame for low academic achievement – this job is a true labor of love. It would have to be for those of us who have still mustered the steely resolve to stay committed to our admirable calling(s) to teach, despite the seemingly insurmountable odds and our universally declining numbers. In all honesty, educators not only feel under appreciated by our students, parents and leadership ranks, but our wrath is incurred by societal disregard on a much larger scale. In fact, whenever the proposal of increasing teachers salaries comes up in social, political contexts the common response is almost always “where will we get the money from?”. Really people?! This incredulous query comes despite the painful reality of a POTUS who readily misappropriates tax dollars to finance his oppressive ICE agenda while underfunding FEMA (even in the wake of impending disaster from #HurricaneFlorence). So, since the culture at large purports to love teachers, via lip service, yet deems it appropriate to underpay our distinguished ranks, c/o government funded priorities, this homegrown crisis must now be owned and repaired from within.

To be clear: in America it is teachers who comprise the class of the working poor. Never mind the fact that the popular image of the fight for a living wage is fast food workers, who are similarly grossly underpaid. Indeed, the authentic poster child for America’s well-educated and professional underclass is its teachers. How much do we make some might ask? Well, therein lies the rub of another significant problem – it depends upon the state in which one lives. Talk about your subjective screw ups. Whether any given state legislature is Republican or Democratic; insane or of sound mind . . . the salary of America’s teachers is a completely non scientific, unstable and wholly flawed afterthought for this nation. Consider for a moment that city, state and even some national legislators who exert the aforementioned influence and power in determining both education budgets and teaching salaries often have earned only a high school diploma themselves and it’s easy to recognize the abject failure in applying inconsistent standards and unique formulas to determine the salary of arguably, America’s most educated class. The outdated notion of teachers’ commanding a meager salary is typically derived from state’s school aid formulas and taxes and this funding allotment has not kept pace with the increasing cost of living. Teachers are highly qualified and certified professionals, required by law to hold bachelor’s and master’s degrees (and for those of us who now teach on the graduate level like yours truly, we hold doctorate degrees), but are paid as though we never graduated high school.

It’s no wonder why so many promising educators regularly abandon the profession. Forget that the common narrative suggests that the stresses of the job are overwhelming. While the rigors of the profession are indeed taxing, it’s not because of a lack of preparedness or even from common sources of job dissatisfaction that prospective teachers leave the job in droves (within the first 5 years), but simply as a result of the absence of a living wage commensurate with our education and experience. Everyday our children are sent to school to be taught academic, social and character development lessons and even even when biological parents have abdicated their own obligations to their children, teachers model the virtues of nurturing, respect and social responsibility as a job requirement. Educators overwhelmingly provide the academic and social framework from which all of society functions and we capably arm each individual with the knowledge and skills to build a better future for themselves and others. Alas, you could never pay us what we’re worth, but a living wage is an admirable step in the right direction!

Education reform begins, not in standards and curriculum advancements, but with teacher’s salaries. It’s imperative that this change be forged from both a sustained, grassroots community driven movement and at the highest levels of government and public policy. From selling clothes at consignment shops, to working holiday shifts in department and grocery stores to freelance work and donating blood plasma; teachers are forced to resort to less than stellar methods of earning extra cash, and risk outright killing ourselves by working multiple jobs – just to survive and stay afloat. Teachers deserve better. According to the Time magazine article featured in the blog image, “For many teachers, this year’s uprising is decades in the making. The country’s roughly 3.2 million full-time public-school teachers (kindergarten through high school) are experiencing some of the worst wage stagnation of any profession, earning less on average, in inflation-­adjusted dollars, than they did in 1990, according to Department of Education (DOE) data”. It’s now or never. Teachers across the nation have spoken and we have earned the right to reap the benefits of our vast knowledge and wisdom, shared willingly and in good faith.