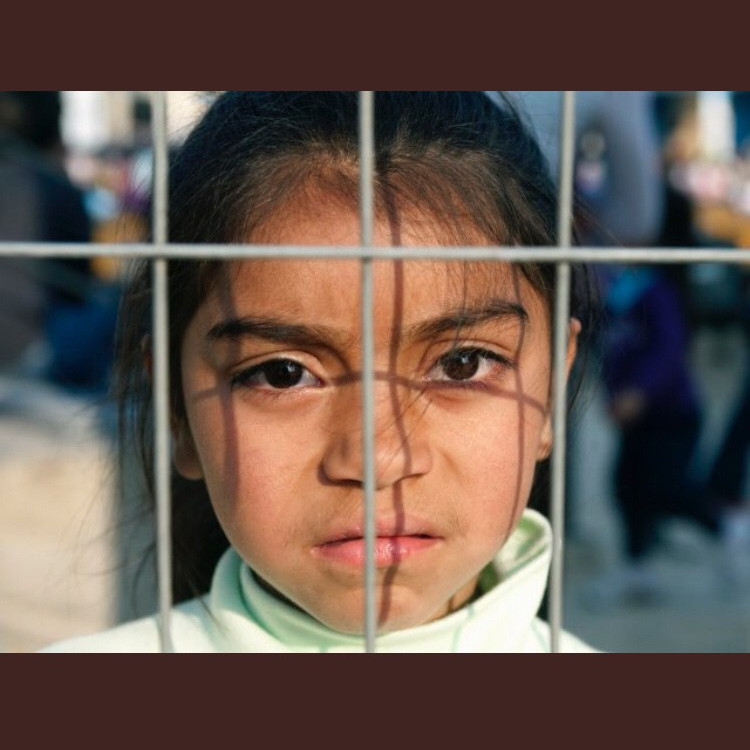 If a single image could represent a poignant sign of the times, then brown children – adorned with sad, haunting, accusatory, fixed gazes while locked behind cages – reflects an autobiographical portrait of Trump’s America. This reprehensible chapter is marked by innocent, defenseless children screaming in horror as they are forcibly torn apart from their parents by defiant, heartless and spirit/soul devoid ICE agents. The inhumane enforcement of human enslavement is financed, encouraged, and legislatively sanctioned under the explicit direction of Trump, who is fulfilling a campaign promise to literally and figuratively coerce his agenda to “build a wall” against any/all threats (real or imagined), to national security. Approximately six weeks ago, Trump’s “zero tolerance” policy took full effect and in the interim, more than 3,700 children (and counting), have been caged behind bars and in internment camps, like common criminals. National Guard troops from all across America have been deployed to the border to forcibly implement this outrageous, abusive policy and to otherwise enforce Trump’s “zero tolerance” initiative. Countless national and state resources have been re-directed to support the smokescreen of a border crisis. Meanwhile, Democratic legislators have echoed a common theme of powerlessness; while Republican legislators have overwhelmingly maintained a code of silence and articulated support for all of Trump’s racism-fueled initiatives. Ultimately, these aggressive actions are characteristic of the increasingly racist personality disorder of the American system of governance and increasingly reflect the ideology of the American people. Without question, the implications of such outrageously illegal and immoral actions will reverberate for years to come. This is America.

Some might ask, what are the implications for everyday, working-class Americans, who have yet to publicly and/or collectively express outrage about this policy? Well, the former head of US Immigration & Customs Enforcement (ICE) recently made public his prediction that the vast majority of separated children will NEVER be successfully reunited with their parents. Consider the lasting implications of being forcibly ripped from one’s home and family only to realize that you will never be reunited with all that you once knew. For those of us of African descent, imagining this nightmare is a no-brainer, as this description characterizes the reality of the horrific period of chattel enslavement that America is once again, inhumanely inflicting upon others. The impacts are indeed permanent and manifest in palpable forms of: PTSD, self-hatred, mental and psychological harm, physical and developmental neglect, and an increased rate of mortality. Similarly, migrant children have already been detained (without the benefit of proper record-keeping), afforded sub-standard nutrition, medical care and personal attention and dispersed throughout the U.S. to ultimately be educated in an already overburdened, U.S. school system. The vicious Trump devised immigration cycle can be loosely understood in this manner: children captured at the border have been physically detained in cages, tents & warehouses, while infants and toddlers are held in “Tender Age Shelters”. As it regards the average rate of detainment that this self-inflicted emergency immigration crisis has engendered – forced family separation under Trump’s “zero tolerance” policy has dramatically increased the typical turnaround time from several months to two years to just 3-4 days. The costs are equally mind-numbing, and approach the exorbitant taxpayer-footed total of approximately $775/per day/per child. Perhaps most egregiously, though migrant parents have been afforded and/or assigned public defenders in U.S. immigration courts, the government rather quietly deemed it appropriate, (just 30-days ago), to halt all funding to legal defense for direct representation on behalf of all migrant children. What an illegal, expensive and permanently scarring initiative to characterize dictatorship styled, U.S. policy in 2018. This is America.

Adding insult to injury and harm, as a means to maintain the vicious cycle of “zero tolerance” border enforcement, U.S. immigration agents are currently engaged in personally escorting thousands of children, (who had been forcibly detained at the border, then held in temporary internment camps), to designated states all over the country. Countless numbers of traumatized and heartbroken children are arriving to various destinations, via redeye flights and being placed in random foster care centers and group homes in assigned states, like New York and Michigan. Here in MI, there are only two foster care agencies that have contracts with the federal government and are duly licensed to handle refugee resettlement — in this case, they are now charged with finding foster homes for hundreds, even thousands of immigrant children separated from their families. In other words, children like the one pictured above, will essentially be lost in the system, and otherwise forcibly orphaned by the U.S. government. In spite of this, Trump is exploiting his apparent affinity for issuing non-committal, media manipulative and distracting statement(s) and promises that he will soon “sign something to augment the policy” derived from his very own executive agenda. However, while he plays politics, inhumane border enforcement actions continues at astonishing levels and irreparable damage has already been done. As earlier stated, for those who are most vulnerable, the children, the damaging results of “zero tolerance” policies are permanent. Therefore, these children have not not been merely leveraged as pawns, but rather have been kidnapped and must be regarded as living, breathing hostages, prisoners of war being held against their will – thousands of miles away from their parents. This is America.

Our children are watching. American children and young adults have been raised to witness and to seemingly normalize concentration camps, physical enslavement, and gross inhumanity at the hands of the U.S. government, within the course of their own lifetime. How will our children regard this period in history? Sadly, many will choose to replicate this abhorrent behavior as it is being justified, and largely viewed as an attempt at restoring the American value system, and making America great . . . as if that period ever really existed. For others, they too will be permanently affected, as they will have been traumatized by having witnessed the horrifying reality of government sanctioned child enslavement and trafficking. The impact of acknowledging the depths of man’s inhumanity to one another, may ultimately render the next generation incapable of ever achieving their own moral potential. How will we as parents and educators, in turn, give instructional voice to such atrocities against humanity? How will we compensate for the grave injustices these migrant children have already faced, with the woefully insufficient educational tools we have been afforded to work miracles of the countless children already enrolled in U.S. schools? Will we say that we stood idly by during the course of this bureaucratic nightmare – hopelessly crying, wringing our hands or waiting and watching for an external end to this Trump-orchestrated immigration crisis? Or will we stand on the right side of history by condemning these actions in every imaginable form and lending our voices, finances, leadership and political power via powerful lobbying efforts to the collective objective of forcing change?

I submit to you that advocating on behalf of the families (especially the children), of those fleeing poverty, war and certain death is the only humane course of action. I may well stand corrected, after all . . . This. Is. America.

3 thoughts on “This is America.”