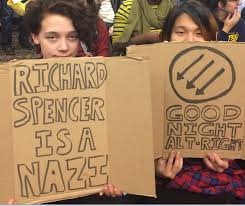 The Metro Detroit area has always been marked by the racially divisive undertones of White v. Black separation and as so goes Detroit, the rest of the country mirrors this pattern. In a curious paradox, Detroit is just as noteworthy for our historic alignment to figures like Detroit Red/Malcolm X and the infamous Rebellion (erroneously referred to as a riot) in the 60s; as we are for the storied legacy of White Flight, segregated city and suburban population trends and for a history of active, continuous Klan activity in areas like Howell, Mason, and even within the heart of the city. With Detroit area locations like the Little Caesar’s Arena and area artists like Kid Rock serving as the veritable ‘poster child’ for confederate flag wearing forms of institutionalized oppression – it is timely for all Detroit area residents to #StayWoke and to continually #EducateToLiberate the marked surge in White supremacy in the Trump era, particularly as it manifests in this city.

The age of Trump marks a curios surge in White supremacy activity nationwide and this area is certainly no exception. This weekend, Alt-Right attorney Kyle Bristow has convened a conference of like-minded White supremacists (to be held in a ‘secret’ location in Detroit), and this is not surprising given that this area is not unlike other metropolitan areas in this country, which have become a hub for White supremacist and neo-Nazi activities. Perhaps as a public and unprecedented show of the Trump administration’s support of such endeavors, Vice President Pence is uncharacteristically ‘visiting’ Detroit today as well…(things that make you go Hmmm).

As Bristow’s organization comprised exclusively of White men, Foundation for the Marketplace of Ideas, Inc. spearheads this White supremacist conference event and America’s de-facto, alt-right spokesperson Richard Spencer converges on the Michigan State University campus on Monday, March 5, 2018 – it is imperative for grassroots and social activists, city residents and all people of good conscience to #StayWoke and not be lulled into a haze of complacency or mis-guided media propaganda. Informed activists have always suspected that the Fox-led media leanings to the alt-right intentionally focuses public attention on that which is reactionary or insignificant, rather than ensuring that we as a people are well-informed and proactive in our knowledge base. Therefore, it is our responsibility to monitor and effectively ring the alarm of such incendiary, White supremacist activities as they crop up nationwide. The prevalent surge in White supremacy is a poignant reminder of our collective obligation to be mindful of all of the Holocaust reminiscent ‘ethnic cleansing’ tactics of the Trump administration and to #StayWoke as we conduct our everyday lives.